My last guest was relatively new so this time I asked
someone who has been following me for a very long
time.  My Guest Writer #2 is Michele and Rich, I think
they wrote it together since I asked them both...

Take a small trip down memory lane with us to the late 80's. Our sons' school, Christian Brothers Academy in Lincroft NJ, had their Art Show each year in early February. One of the first shows we attended had works by a Pennsylvania artist named Andy Smith who just happened to have his wife and 4 year old daughter with him. After having a lovely conversation with Andy, Linda and wee Abbey, we purchased a picture entitled Yorktown Ice House and two other originals. I just did a quick walk thru of our house in North Carolina and we have 40+ originals! Several have made their way to California and some are still in NJ and Staten Island.
Each year we were drawn to Andy's display - we loved them all - we appreciate his fine eye and unquestionable talent. In recent years many of his works reflect the world travels he and Linda have enjoyed and we were thrilled to include some of them in our collection.
When we look back over the years - and we are approaching nearly 30 years (!) - we have great memories of the times when we hosted Andy and Linda at our home - including one show in a February that was snowed in till Sunday - lucky we had pea soup and steaks in the freezer - regular November trips to Lititz for the Smiths' Open House and quick rides "down the shore" to Seaside Heights.
It's been thrilling to know and collect art from a living, breathing artist.


We plan to attend the Waterford show in Virginia this October since it's been nearly two years  - hey Linda, time to find venues in East Carolina!

THANK YOU both!
Posted by Andy Smith, artist ~ watercolors at 7:00 PM 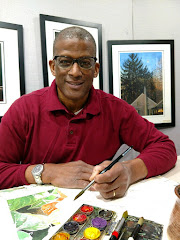