I went to the weekend show by myself so Linda could get a few things done around the house.  Huge mistake. She goes through things like a tornado!  Stacy was her weekend helper but... it always creates work for me.  The plan was for her to get the gardens in shape for Porchwalk (September 29-30). I am told the gardens inside the fence are as good as they get for this time of year.  Six of the large  brown yard waste bags full.  Then they cleaned out our shed.  I don't understand why she even went into the shed... So now there is a small pile of junk that I have to take to the dump.  Yes, I understand there is now room to actually walk into the shed but was it necessary to do that now??   And she has a large heavy pile of old tear sheets to go to the paper recycle place.  She also cleaned out her studio closet and had a car load to go to the Ephrata Craft Recycle, a small pile for Goodwill and the Library. She was only home alone for three days!  So you know that my day was spent going to these places making drop offs and not painting.  She will not be left home alone for a while!

I did however finish this painting over the weekend and I think Linda is planning to make make it into a holiday mini print for Open House. 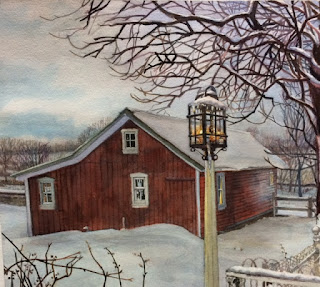 This is a barn from the property of my potter friend Lynne Taylor.  I think it was last winter.  I hate snow but Linda insisted it would make a great painting and I hate when she is right!

Posted by Andy Smith, artist ~ watercolors at 7:00 PM No comments: 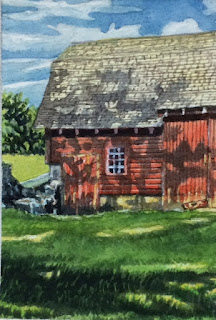 A back view from the Brinton 1704 House in
West Chester, PA
Posted by Andy Smith, artist ~ watercolors at 7:00 PM No comments:

A Painting A Day

I am offering two paintings today.  The still life I finished before I left last week but did not have time to post and today I wanted to do something very different, just to see if I could pull it off! 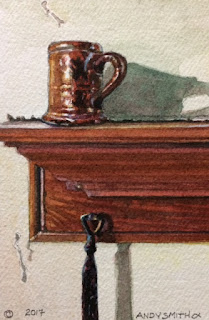 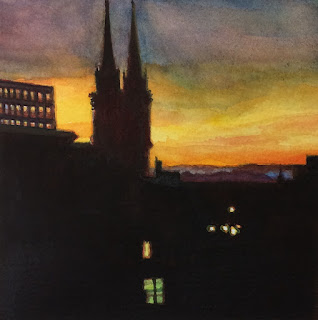 In case you were envying my life here is a weekend update:  we left home on Thursday morning and drove four hours to Pittsburgh.  Climbed out of the van and spent the next four hours setting up my booth.  Tired and hungry we checked into our hotel and walked to Fuel and Fuddle for dinner.  We ate here with Abbey when she was going to college at Pitt  so it was a bit nostalgic.  Friday morning Linda was able to sleep in a bit and we took the hotel shuttle to the show around 10:30am to hang the paintings, tidy up the booth and roll up the tarps.  The show was from 1 to 7pm, I finished a painting I had been working on for a week which I will show you later.  We packed up the paintings and caught the 8:15 shuttle back to the hotel.  Too tired to eat, we showered and early to bed.  Saturday we were out at the show by 8am to do it all over!  This is a long show day, it went from 10 to 7!  Yup, that's 9 hours sitting outside making it an 11 hour day for us.  We had mac and cheese from a food truck and that was it for the day.  Oh, Linda reminded me we also had chocolate raspberry cookies!  Again, tired so it was early to bed.  I did win an award!  This show is a very high quality show run by the Pittsburgh Craft Guild so everyone here had excellent work.  I was honored to receive an
"Outstanding Craftsmanship" award.  And with this group that's saying something. 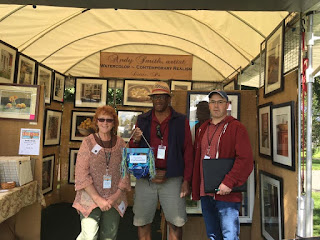 Sunday we were back out at 8am to start all over.  The show ran from 10 to 5.  And at 5 we packed up the booth which took two hours.  By now I am starving so we had an excellent dinner at Point Brugge Cafe .  I was a little hung up on food or rather the lack of it all weekend!  The show was very good for me and worth it, we plan to return again next year.   Monday morning I let Linda sleep in  (there is a pattern here!) and we were on the road by 10:30.  Stopped for breakfast and had a four hour drive home.  Once our feet hit Lititz sidewalks I unpacked the van while Linda handled mail and phone messages and two loads of laundry.  I ran to the store (because the fridge was bare!) while Linda laid out tomorrows work list.  I look up and its night time!!

Tuesday I have two classes to teach.  And I will do this all over again this weekend!
If you are near Doylestown PA save some time to stop out at this very good show:
Bedminster Traditional Artisan Show
Sept. 16-17 held at Delaware Valley University.   More details later in the week.   Off to bed...
Posted by Andy Smith, artist ~ watercolors at 7:00 PM No comments:

I do not think I will get a blog painted this week.  My classes started so that takes several hours out of my day.  I was working on the one I started at Heart of Lancaster show on Sunday. Tomorrow I have two more classes plus I need to pack.  I leave Thursday for Pittsburgh.  Please tell all your Pittsburgh friends to stop and see me!  Booth #51 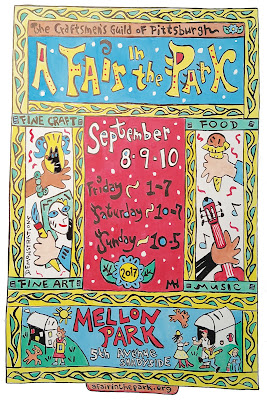 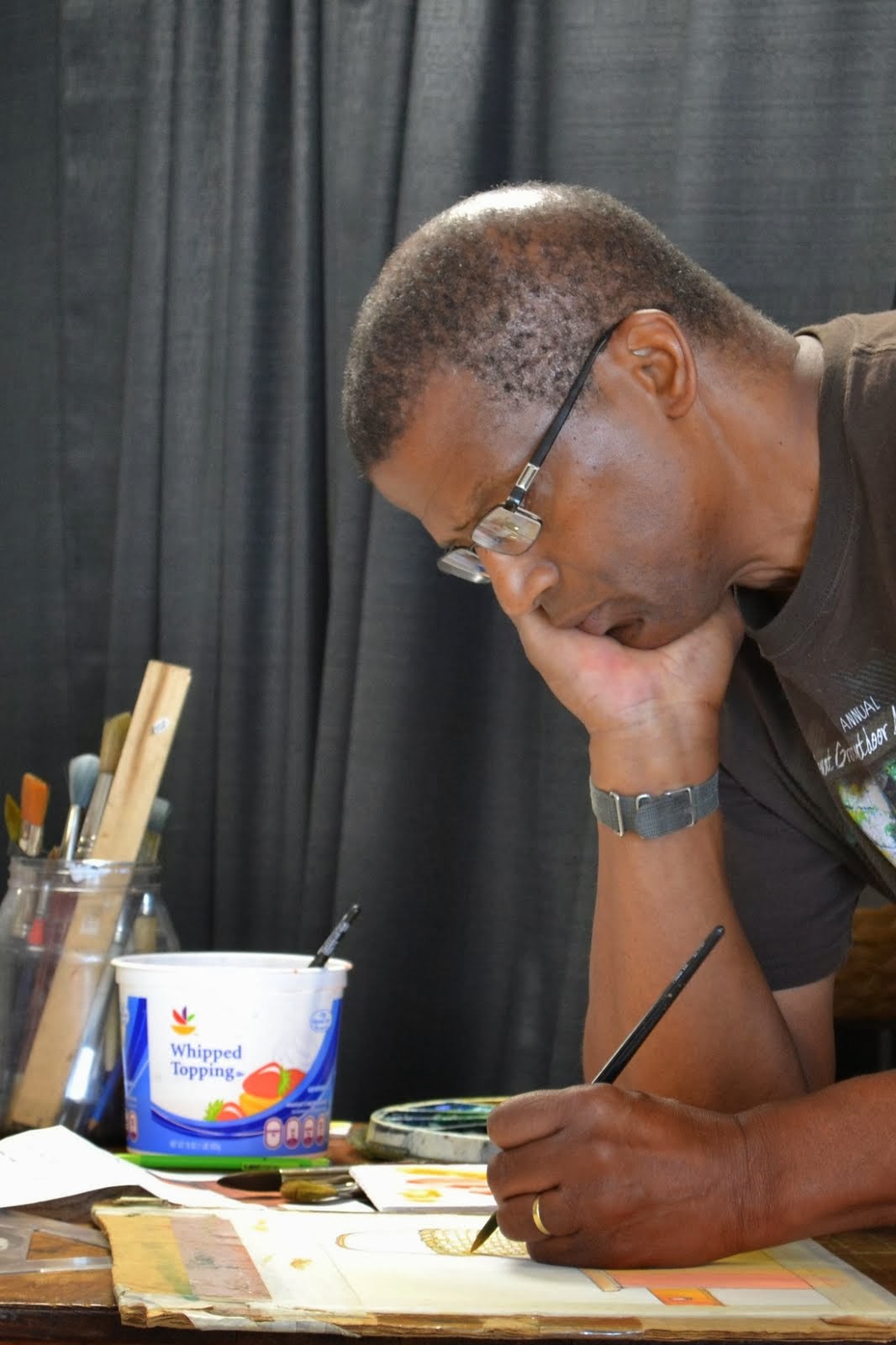 Where to find me!

My goal is to join the other accomplished artists in the "Painting A Day" arena. I am expecting this endeavor to sharpen my painting skills and to help me grow as a watercolorist. I already paint full time and exhibit at art shows but I am hoping this experience will allow me to explore subjects I would not normally choose to paint. I hope you enjoy taking this journey with me. Andy Smith

Each watercolor is painted on Arches 300lb Cold Press paper. I use transparent watercolors occasionally adding ink to the wash. I paint in a series of washes to build color, creating shadows and a strong use of light. The PAINTING A DAY paintings started January 1, 2007. Variations in monitor settings plus my camera skills may not exactly duplicate the actual colors in the painting. I do my best! I plan to work in two sizes. An image of 5"x5" with a 1/2" border or an image of 4"x6" with a 1/2" border. You will need to take your new painting to a frame shop to be framed. For shipping, each miniature original watercolor will be placed in a protective sleeve with a foamcore back. The new paintings will be posted for sale via Ebay. Paintings that do not sell at auction are then placed on my show stand at a price commensurate to my other work.